My mother was very different from my grandmother. And hers is a different story. Yet again a story of heartache, despair and loss, exacerbated by the Japanese invasion of New Guinea in January 1942.

Her antecedents are clouded; born to Molly, an unmarried mother in Cottesloe, W.A. in 1914. The circumstances of her birth haunted her in later life. When she met my father she was Joan Mary Ifould of Boram Plantation, T.N.G., adopted daughter of plantation owner Tom Ifould, a WW1 veteran of Gallipoli and France, Military Medal for gallantry. Prior to that she’d been educated in Sydney, studied art and drawing, enjoyed the social whirl of the big city.

Tom Ifould didn’t appreciate the attention being paid to his only daughter Joan by then schooner-master Lincoln Bell. His consent to a marriage was violently refused. So Joan eloped with my father.

Not quite as easy as it sounds.

In about 1981 I received a handwritten note and photograph, given to a friend of mine for me from an old bloke in a local pub “just passing through”. Part of it reads, referring to the photo of a schooner in a bay –

“Lincoln Bell’s ketch Bilola at Sib Sib (Sek Island off Alexishaven) after he eloped with Joan Ifould from Boram.

Lincoln married Joan and Franz Maeder, a quarter caste, married Maliss a native girl who was brought up European style with Joan. Both eloped….Sorry photo so small.”

Repercussions of the elopement and the chase, armed with guns, reverberated. Tom Ifould cut his adopted daughter off and never spoke to her again, would have nothing to do with any of the Bell family.

So at 22, still haunted by her birth and traumatized by her father’s reaction, my mother’s life changed again. From the plantation to a schooner. Some good and exciting years, years that must have softened the pain – until I arrived!

So now we have a young mother in Kavieng, where she and my father made their home.

But the drums of war were beating. Japan was swarming over S.E. Asia on its way to Singapore. Its attack on Pearl Harbour brought home the reality. War was coming to my parents’ piece of paradise.

All too soon, invasion was imminent. Evacuation orders were received and like other women my mother left New Guinea on short notice, with few possessions, one three year old and little money. We went to Tasmania, first to Sandy Bay, then to Oatlands where Joan’s mother Molly and her then husband Nick Carter operated the Midlands Hotel.

My father, Lincoln Bell, and I at Kokopo, PNG

Not a good move. Molly eventually died of cirrhosis of the liver and Nick enjoyed a glass or two. My mother’s vulnerable state succumbed to alcohol. She must have felt very alone in Oatlands.

Her husband’s family was geographically shattered, her home taken over by an invading enemy, her father wouldn’t talk to her, stories of Japanese atrocities were circulating, her husband Lincoln was somewhere in New Guinea as one of Eric Feldt’s coast watchers, eventually prominent in Feldt’s iconic book “The Coast Watchers.”

To add more stress to the separation, she could learn nothing about my father. She didn’t know whether he was alive or dead. No government department could or would let her know where he was, how he was. Bureaucracy in the form of the major in charge of paying allotments to wives of servicemen initially refused to pay her Lincoln’s allotment. Why? Because he hadn’t signed the form! Of course… No matter that he was in mostly Japanese occupied territory.

All these pressures must have combined with the other stresses in my mother’s life.

I remember one day in the Midlands Hotel kitchen. My mother was leaning back against an open green metal breadbin. The telegram boy came in, handed her an envelope. The kitchen went deathly quiet as she tore it open. It was, of course The Telegram, the one nobody ever wanted to receive. My mother passed out and fell backwards amongst the bread, feet in the air. She went to her bedroom for a long time, days. At the time I had no idea what had happened.

My mother took me to Cairns in 1945 to be with my grandmother Ethel, both women coping with loss and lack of information. We lived in a flat in Sheridan Street opposite the old Polar Star Iceworks, later a house in Lake Street. Money must have been very tight for them, both battling government departments for their entitlements. Both wondering what was going to happen.

In Cairns my mother learned the fate of my father. I quote from Eric Feldt in “The Coast Watchers” –

“The natives were impressed by the Jap numbers and terrified by the savage punishments meted out to those … who disobeyed. A few remained loyal to the Coast Watchers…but some openly assisted the Japs. Bell, Laws and Shultz…left (Saidor) for Bena Bena on 2nd May 1941. Bell and Laws had come through much more dangerous situations, and this, merely to walk out to safety (from the Rai Coast to Port Moresby! -Ed.) appeared to be the easiest assignment they had yet been given. For a year however, nothing more was heard… after the reconquest of that part of the country, it was learnt that natives had treacherously killed them. The natives met them in friendship and were carrying their equipment, when…they turned on the three and killed them. The loss of Bell and Laws was a severe blow. Bell was of the courageous, self-reliant breed of whom there never could be too many.”

From the Pacific Islands Monthly, September 1945 –  “…(Lincoln Bell was caught in an ambush, and was killed by a shower of arrows at close range.”

This was too much for my mother. She became addicted to alcohol and slowly disintegrated, physically and mentally.

With increasing alcoholism came a change I didn’t as a child understand. I often had to help my grandmother roll my mother into bed, but my grandmother bore the brunt of the clean-ups, the irrational tantrums. My relationship with my mother deteriorated. It had no chance – a traumatized woman sliding into alcoholism and a boy old enough to be aware but too young to understand or provide much-needed support.

She told me several times I had a sister younger than I, but the baby was taken by a crocodile. She had a photo of where it happened. I can’t confirm this; it may have been an alcohol generated delusion. But whatever, it was real to her. Yet another demon for her to struggle with.

In Cairns, my mother and grandmother learned of the loss of Don on the Montevideo Maru. He’d been captured in Rabaul. More pressure on my mother’s foundering psyche. Many years later, after my grandmother died and my mother was beyond caring, the true story of the Kavieng Massacre and the war crimes trials came to light.

My mother’s condition deteriorated in Cairns until things reached the inevitable climax. I was sent off to boarding school. Only communication by letter, and of course in her condition she didn’t write anything. She was involved in an accident, breaking her hip. Later she was court certified, her belongings confiscated by the State and she was confined to a mental institution where she died some 15 years later. Another victim of the trauma of war.

I was the only attendee at her funeral. 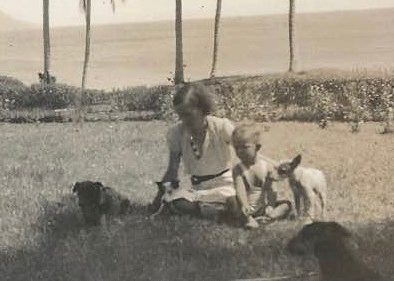 My other and I at Kokopo, PNG