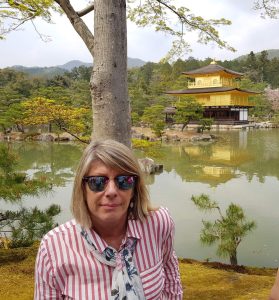 We check out the Golden Pavilion, Kinkajuji Temple, a Zen temple and world heritage site. It’s Easter, holiday time and we learn the meaning of mass tourism. Sardines in a school of seemingly millions. The temple, covered in gold leaf is crowned by a golden rooster, dates from the 14th century. 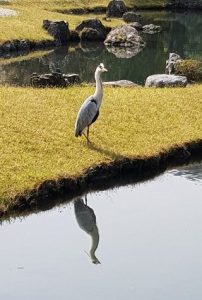 We wrongly identify a large heron reflected in the mirror-like lake. It wasn’t  a crane after all. Eventually the sheer numbers of people get to him, and he flaps ponderously away. 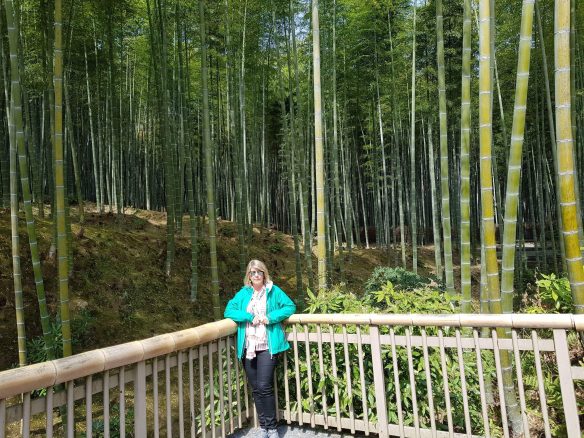 Along with the seething hordes, we walk and gawk at the huge bamboo forest, before visiting the 1603 built Nijo Castle.

This ancient and sprawling cypress building oozes power, the strength of the Tokugawa clan. 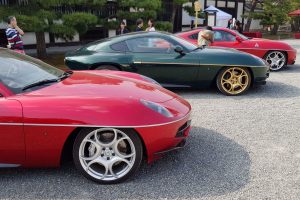 Incongruously, we come across a concours d’elegance…half a dozen beautiful Alfa Romeos in a courtyard, with movie cameras filming models promoting the beautiful vehicles.

Sorry sir I didn’t see the red rope that we climbed over to see the cars! 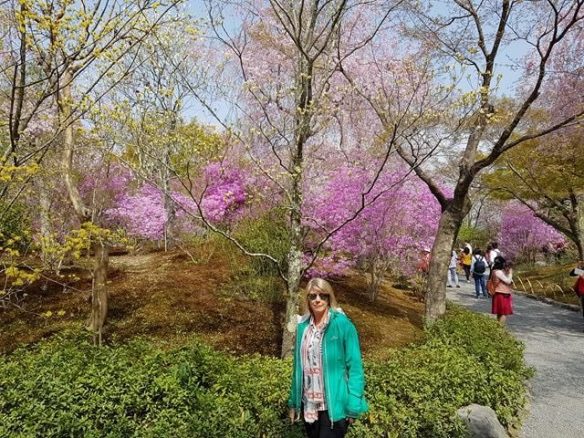 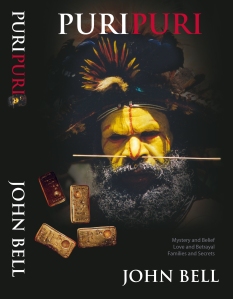 The Kokoda Track, a dense inhospitable jungle track across the rugged mountains of Papua New Guinea, 1942 … a bloody battle fought by a small band of Australians holding off the Japanese invasion.

On the 1st of July 1967 two events are set to occur.  The first is a ceremony commemorating the 25th anniversary of the sinking of the Japanese p.o.w. ship Montivideo Maru, with the death of 1053 Australian prisoners.  The second is Angelique Condor’s 25th birthday. Both events are to take place in the township of Kavieng, a couple of degrees south of the Equator, on an outer eastern island off the coast of New Guinea.

Angie Condor, adopted orphan from war-ravaged Europe and now an Australian photo-journalist, is sent on assignment to Kavieng to cover the Montivideo Maru ceremony.  Full of the excitement and boundless enthusiasm that only youth can provide she accompanies an old warhorse correspondent, Johnno, into this ancient land.  As they lumber out of the heat of Port Moresby on a tired DC3, Angie is gripped by memories and feelings that are not her own.

Through the swirling mists travels the ancient tribal lore that distils the essence of New Guinea tribal spirituality, the lore of Puri Puri.  How can a blue eyed, blond girl from another land possibly have any connection to Puri Puri, an inherited gene found only amongst the tribal people of New Guinea?  And who is Meri Melera, why is she protecting Angie?   Why does the man Karl Frederiksen appear in her “trances”?

Angie finds herself attracted to the ruggedly handsome Nick Williams, who leads her into a dangerous treasure hunt.  Her old friend Giselle had stumbled across a map indicating a haul of Japanese ingots was left behind after World War 2 somewhere on the New Ireland west coast.  Filled with curiosity and excited by the possible discovery of hidden treasure, the friends venture on Nick’s sailing boat to the black, sulphur filled caves, stumbling across a dangerous Japanese Yakuza gang in the process of stealing the gold.

The pace builds as Mother Nature intervenes, and yet another party arrives looking for gold.

Will the love developing between Angie and Nick be enough to survive the temptation of the sensual Giselle, or the mysterious decades-long blood feud between the Williams and Frederiksen families?  A story told in the first book of the series, PAYBACK.

PURI PURI is an action adventure packed with hints of fact, making the fiction so much more compelling. 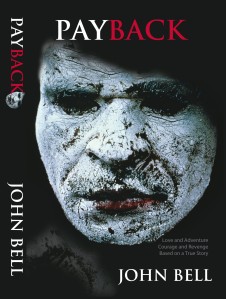 “He leaned on an old bamboo cane, its carved handle smoothed by the years.  A sharp eye might pick out the Sepik River motif, but only a wantok could explain.  Eyes wet, the old man looked up to where the crows hunched … the movie suddenly stopped, then began to roll forwards … Ben Williams was once again seven years old.”

Paradise is shattered the night Lu, niece of a respected and proud Chinese merchant family, was brutally raped.  Such an act cannot go unpunished.  Payback is required, is expected.

And so begins the feud …

Ben Williams – The serious eldest child of Harry and Victoria Williams, leader of the pack, as wild as his adopted country.  From an early age Ben proved a quick study, displaying a raw toughness beyond his years.  While still wet behind the ears, he mastered knife, gun and explosives, not for sport but survival.  His strong business sense expanded the family’s interests beyond copra, into gold, crocodiles, timber and shipping.

Jack Williams – Ruggedly handsome, untamed and competitive.  His vivid blue eyes miss nothing over the bow of his schooner, Garamut. As formidable as his brother Ben in the art of weaponry, the glorious Jane Bifold presented his greatest challenge.  Spiriting her away at high tide against the furious protestations of her father, Jack and Jane find themselves caught up in a war that this tiny nation is ill prepared for.

Josh (Joseph) Williams – Highly competitive, his blue eyes would flash in challenge at his older siblings as he strived constantly to be the best.  Josh quickly discovered that quality crocodile skins were a much sought after commodity, and one he could produce well. He wasn’t prepared for Khanitha, the poised and elegant daughter of the merchant Wong Yuk Chong.  Were his skills enough to win the love of this most magnificent creature as well as the respect of her formidable family.

George Williams – The youngest of the William’s clan.   Born after the tragic death of sister Ethel, he grew up to be a solemn and quiet young man often shadowed by the imposing Ben, passionate Jack and impetuous Josh.  It was the freckle faced young Margaret who would be the one to crack the shell and bring him to life.  A life sadly cut short when captured somewhere in New Ireland, then lost at sea with over 1000 others with the sinking of the Japanese p.o.w. ship Montivideo Maru.

Gustav Hart – With a German father and Tabar Island mother he found himself despised by the Germans and disowned by the Islanders … he grew bitter as he aged.  This bitterness flowed on to his five sons to three mixed-race women.

Karl Frederiksen – A product of Gustav’s brutal parenting, his upbringing created a thug. Blond, cunning and clever.  He is forced to flee Lavongai in the darkest hour of the night following the discovery of his involvement in the rape of the Chinese girl.  Payback is heading his way.  He does not want this exile – for those who forced it upon him their time for payback would come.

“Once I started, I couldn’t put it down.  A real page turner. Congratulations.” KL, NSW

“Payback is a great read, I couldn’t put it down.  A heartbreaking story especially knowing it is based on a true story.” LB, TVL

“I have just finished my reading of Payback last night. This was a book equal of any that I have read … it was a novel that was hard to put down, and for some the epic would be seen as being profound in the history of Australia.” GB, QLD

“Outlandish, but has a ring of truth.  Payback is a true story disguised as a novel.  Based very closely on Bell’s family history, it is set in New Guinea … The temptation for the reader in this book is to try and work out what is true and what is fiction, but this is a fruitless exercise … Bell has produced a great read – tragic, funny, engaging and throwing a new light on our nearest neighbour, PNG.  In a word: ENGROSSING.”  Excerpt of review, Townsville Bulletin’s Weekend Extra

Purchase by following the links below: