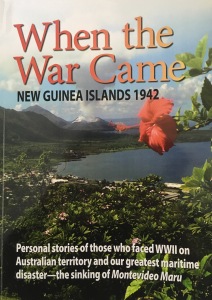 Seventy-five years. A life time for many.

A life time denied to 1053 – mostly Australian – soldiers and civilians, locked below decks on the Japanese ship Montevideo Maru, torpedoed and sunk on 1 July 1942 by the US submarine Sturgeon.

The Papua New Guinea Association of Australia (PNGAA) team have published a superb book, When the War Came which addresses the personal issues of loss in a collection of stories by relatives and friends, humanising this important piece of Australia’s history.

I am proud to have several personal stories included in this publication.  Firstly, ‘Recruiter and Schooner Master’ and two parts under the title – ‘They Also Served’.

‘Recruiter and Schooner Master’ – commemorates my uncle, Donald Joseph Bell, whose name appears on the manifest of the sunken ship Montevideo Maru.

The Rabaul and Montevideo Maru Society, and the PNGAA have worked tirelessly to have this bit of Australian history included in the nation’s education syllabus.  Largely excluded from school history curricula, that sinking and the Australian planning for and response to the Japanese invasion of New Guinea don’t reflect well on the government of the day.

The Japanese freighter, enroute from Rabaul to Hainan, bore no markings to indicate its cargo. Just another enemy vessel. A legitimate target.

Wartime censorship and perhaps a government – successive governments – wanting to not publicize the sinking has clouded Australia’s worst maritime disaster.

‘They Also Serve’ are my stories of two very different women, my paternal Grandmother, Ethel Harriet Victoria Bell, and my mother, Joan Mary Bell.  Both living in New Guinea, each losing a husband, each spent year’s not knowing, each suffered in her own way.